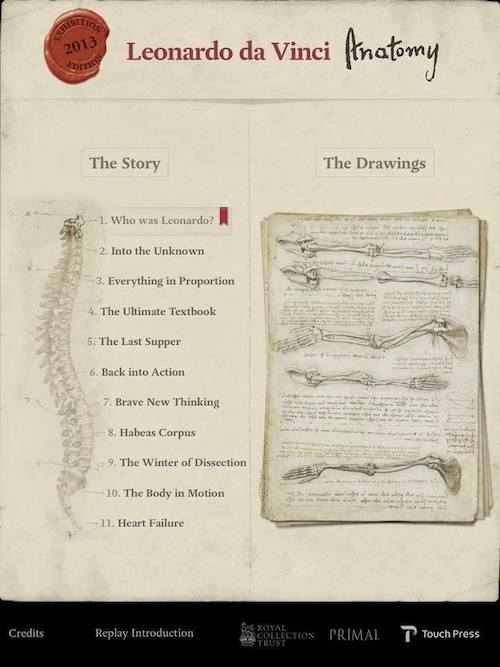 Leonardo da Vinci: Anatomy — all 268 pages from his notebooks, in high resolution.

This sublime collection of drawings of human anatomy by Leonardo da Vinci is one of the greatest treasures from the Royal Collection of Her Majesty Queen Elizabeth II at Windsor Castle. All 268 pages from Leonardo’s notebooks are presented here at the highest resolution, optimised for the pin-sharp retina display of the iPad. For the first time it is possible for anyone with an iPad to own and explore this remarkable testament to Leonardo’s scientific and artistic genius.

This new digital edition has been specially created for the iPad by Touch Press, publishers of The Elements and Solar System, working in close partnership with the Royal Collection. The app provides the following special features:

• Comprehensive catalogue text for all drawings in the exhibition Leonardo da Vinci: The Mechanics of Man at The Queen’s Gallery, Palace of Holyroodhouse (2 August – 10 November 2013)

This beautiful interactive edition of Leonardo da Vinci’s anatomical notebooks transcends the printed page. Here Leonardo’s work is presented in a way that is both illuminating and a pleasure to explore. This is an edition for the 21st Century in a digital form that the archetypal Renaissance Man would most certainly have appreciated and approved.

————
Winner of the 2013 Webby Award, Education and Reference Tablet App.

Winner of the 2012 British Book Design and Production Awards, Best Use of MultiMedia. 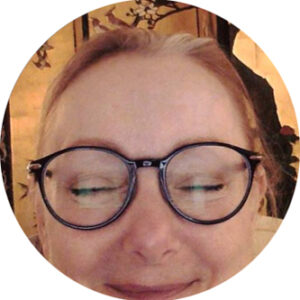 Adrienne Asher’s poems explore ways of finding what female agency and power look like in mythology and history, how to love what perishes, and how our lives resemble and differ from our animal cousins. Her painting in oil range from realism and abstract, depending on the season. She lives in the Pacific Northwest with her musician partner, a Maine Coon cat, and nine miles of books.